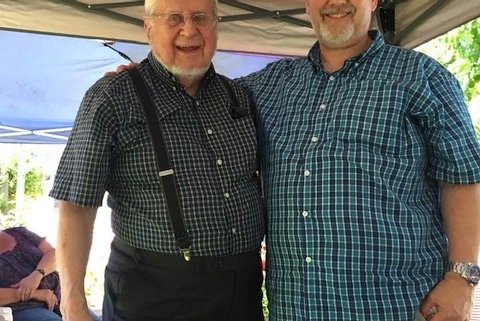 Remembering our friend Dick Wahlstrom, who entered Christ’s presence on May 21, 2020, made us laugh. That’s because the first thing we remembered was his laugh, which started with a cackle and ended with a snort or two.

Dick laughed easily and often. I think it was because he was at ease with himself, relaxed enough to see the humor around him. It wasn’t a mocking laugh. It was a friendly laugh that invited you to join him, to share the joke. He just thought we humans were a pretty funny bunch.

Remembering his laugh helps me chuckle at human foibles, too–including my own–but without condescension. He was so many things to so many people: counselor, mentor, sculptor, friend. His was a hidden life, an ordinary life, that was astonishingly fruitful.

People came to Dick Wahlstrom with their problems. His office was high in the tower of Hinson Memorial Baptist Church, an historic brownstone located in Portland, Oregon. The people who walked up those many stairs had slinked in through the side door. They were struggling with a variety of ills–addictions, depression, fears, shame. They were bringing broken things for him to fix—marriages, unemployment, infertility, abuse.

I picture each one, perched tense in his office. Or slumped deep in a chair. Or fidgeting, eyes averted. I’m here. What should I say? How will he react?

But Dick wasn’t anxious, he was easy, unassuming. “What’s going on?” He opened the conversation in his broad Chicago accent. After that, he listened, taking notes to keep the details straight, asking questions to make sure he understood. Sometimes he paused, giving them space. Sometimes he wept.

They might have come in by the side door, but they left through the lobby, meeting the eye of the receptionist on their way out, remembering the way he had honored their struggle.

They might have come in by the side door, but they left through the lobby.

My husband Mark met Dick first. He had just moved to Portland for seminary, and was looking for a church home. He showed up at an evangelism training class Dick was teaching on Thursday nights, but he found the program they had adopted for sharing Christ with the community to be mechanical, and full of false guarantees to produce results.

The next week at class he handed him a book to read that challenged the shallow gospel presentation. Dick rolled his eyes. Here comes another know-it-all seminary student who thinks he can fix things with a book. But he took the book and promised to read it.

A week later Dick called, “We need to talk.” Despite the 22 year age difference between them, he was willing to learn from a younger guy. This was the first of many times that his humility mentored us. But more than that, it launched a friendship that would last 4 decades.

His humanity mentored us, too. Early in our married life, when I broke down into sobs about something I’ve now forgotten, my newly minted husband said, “Now calm down. I can’t talk to you if you’re going to cry about it!” That only made me wail louder, “Who can I talk to if I can’t talk to you??”

Exasperated, he called Dick. What am I supposed to do now? Hug therapy. That was his prescription. “Listen, don’t fix” was another word of wise counsel. We’ve never forgotten it.

Hug Therapy. That was Dick’s prescription . . . . We’ve never forgotten it.

Another time we were going to go out for ice cream cones with Dick and his wife, when my frugal seminary student husband suggested that he could buy a half gallon for less. That brought a snort. “Lauterbach, life’s too short!”

Yep. Remembering Dick means remembering ice cream, and that some splurges are worth it.

Like Gibbs on the long running TV program NCIS, Dick not only loved woodworking, he built his own boat, in Dicks’s case a canoe. Unlike Gibbs, he actually finished it and took us out in it when the weather was good. He also designed and built camping boxes that could be packed with supplies, stowed in their car, and then set up as a sort of portable kitchen, which Doris set up while he pitched their tent. It was neat and clean and almost turned me into a camper. Almost.

But what Dick loved most was to find a scrap of wood lying on the ground somewhere and take it home. He would study its grain, its curves, its markings. Eventually, he’d take it down into his basement workshop, where his tools hung in perfect order on a pegboard. Then he’d begin.

Remembering how he worked with the wood, I was struck by the way he honored his raw materials, seeking to bring out the best in them. He wasn’t imposing a design on it, but trying to partner with the Designer who had created it. His finished product was non-representational, burnished to show the grain of the wood. “Don’t ask me what it is…” he growled more than once. We would mess with him by coming up with names.

He gave us a sculpture of our very own, before we moved away. It reminds us of him, how he tried to bring out the best in us by cooperating with God’s design, instead of imposing his own.

For any years, we met monthly for a chocolate dessert. Each month it had to be a new one. It was a monthly dose of chocolate and great conversation. We spent many a holiday meal in their home, with their 2 kids, David and Deanne.

After we moved away, we covenanted to keep up. Friendship like this was too priceless to let time and distance erode. There were more phone calls than we could count, times when we would seek his friendship and counsel.

Dick and Doris would come visit us. We explored the Grand Canyon and Tahoe together and ate good food. We showed them our favorite discoveries so they could share our delight. Our kids got to know their “Oregon Grandparents” and began to let down their guard. Invariably, their visit ended with a family meeting.

“How’s everybody doing?” Dick began one time. “Kids, how old does your dad make you feel?”

Rachel, who was 12 at the time, responded immediately, “8!” Mark and I looked at each other, then at her. “Dad, you don’t trust me. You’re always checking up on me, like asking if I’ve done my homework. What are you thinking? I ALWAYS DO MY HOMEWORK!!”

Dick acted as referee, helping our kids to speak frankly, helping us to hear—really hear them–and make some changes. We learned that the status quo needed to change and began to understand why. We found out that our youngest child had become the family scapegoat, and that our middle child (the boy between two girls) wasn’t simply ignoring us when we called, he was busy inventing something.

The Surprising Power of an Ordinary Life

I think the secret of Dick’s influence was that he loved you and you felt it. He conveyed a feeling of uncritical delight in the person in front of him. Oh, he could counsel, of course, but he wasn’t merely trying to figure you out; he was also enjoying you.

I was one of the many who needed that love. I was highly aspirational, always trying to prove myself worthy of my easy childhood and top tier education. Consequently, I was always striving—reading the next book, taking on the next challenge, reaching for some goal that would finally justify my existence.

And Dick was the perfect foil. He could just be. When he was around, I found I could finally relax and just be, too.

What was the source of the love he gave? How did he learn it? At 40 he became impressed by God’s love for him, and how much God could love other people through him. That love touched so many.

A few years after his first wife Doris died, he married Sue. Her previous husband had been difficult. Over time Dick’s love healed her.

He leaves behind a legacy of love.